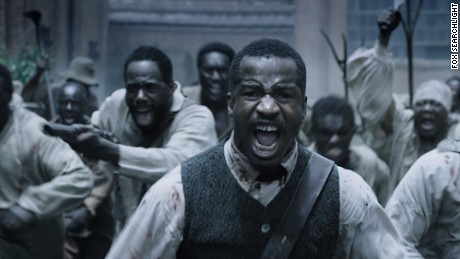 (CNN) “The Birth of a Nation” is a very good, at times powerful movie. But for the film to be considered an Oscar frontrunner — a weight it has borne since triggering a bidding frenzy at the Sundance Film Festival — would require a relative weak year.

Fairly or not, the movie can’t be divorced entirely from those expectations, or the other noise and controversy that has swirled around it. That includes its broader context, at a time when institutional racism remains very much part of the national conversation; questions of diversity dogging the movie industry; and the personal baggage related to its star.
Everything about this tale of Nat Turner’s 1831 slave rebellion has been freighted with significance. For Hollywood, writer-director-producer-star Nate Parker’s wrenching look at slavery initially looked like the answer to a prayer — a sobering work by an African-American filmmaker with major awards potential, amid the absence of minority actors that unleashed the #OscarsSoWhite campaign.

That gave way to revelations about the rape charge against Parker in college, which, despite his acquittal, has left some of those inclined to root for the film feeling conflicted at best, and repulsed at worst.
At this point, it’s all but impossible to completely separate the film from award politics or Parker’s history. Trying to be dispassionate about it, the movie is very much worth seeing, without rising to a level that warrants the early enthusiasm affixed to it.
Like so much involving the current state of movies, part of that has to do with television, which has recently covered similar territory quite well with a pair of miniseries — this year’s Emmy-nominated “Roots” revival, and BET’s “The Book of Negroes.” (The latter featured Aunjanue Ellis, who co-stars as Turner’s mother.)
Cleverly reclaiming the title from D.W. Griffith’s silent epic that celebrated the Ku Klux Klan, “The Birth of a Nation” chronicles the true story of Turner, the minister who led a bloody revolt. Beginning with Turner learning to read at an early age, the director (who shares writing credit with Jean McGianni Celestin) steadily builds toward the release of Turner’s pent-up rage, stoked by one heinous example of abuse after another.
Turner witnesses those horrors thanks to his social-climbing master (Armie Hammer), who rents him out to other plantation owners — offering a black minister whose sermons are seen as a way to calm Virginia’s restive slave population. The pain is magnified by brutality that strikes close to home.
Eventually, Turner met violence with violence — an act of desperation that feels cathartic and hopeless. “Birth of a Nation” seeks to forge a connection between the discontent into which he tapped and slavery’s abolition, even if it took another generation to get there.
Technically, the movie is beautifully made, if at times a tad heavy-handed in foreshadowing Turner’s importance. While the central theme is his emotional journey, the female characters (among them “How to Get Away With Murder’s” Aja Naomi King as Turner’s wife) also feel underdeveloped.
As hard as some sequences are to watch, the movie isn’t groundbreaking; rather, it’s a solid addition to earlier productions chronicling this period, among them “12 Years a Slave,” an Oscar winner in 2014.
Much of this context has been obscured by the debate surrounding the film, where the focus has shifted in part to the ability to separate art from the artist.
With “The Birth of a Nation,” Parker has established himself as a major talent and filmmaker to be reckoned with. Yet as with Nat Turner’s revolt, it might require time to achieve the emotional distance necessary to put his film in perspective.
“The Birth of a Nation” opens October 7. It’s rated R.