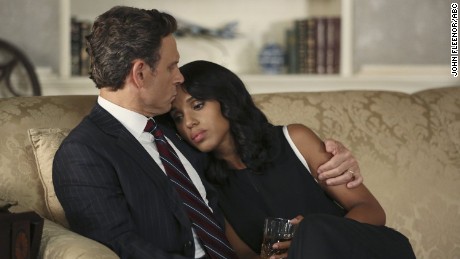 (CNN)It’s Kerry Washington like you’ve never seen her before.

The outtakes from Season 5 of the hit ABC drama “Scandal” are downright hilarious. In a blooper reel obtained by TVLine, Tony Goldwyn swears on set, Guillermo Diaz’s cellphone goes off in a scene and Scott Foley really doesn’t want to practice kissing.
The “Scandal” storyline will reportedly pick up on election night when it returns for Season 6.

“We’re not going to spend our time playing an election,” executive producer Shonda Rhimes recently told EW.
Gladiators will have to wait until “Scandal” is back on ABC in January for more.